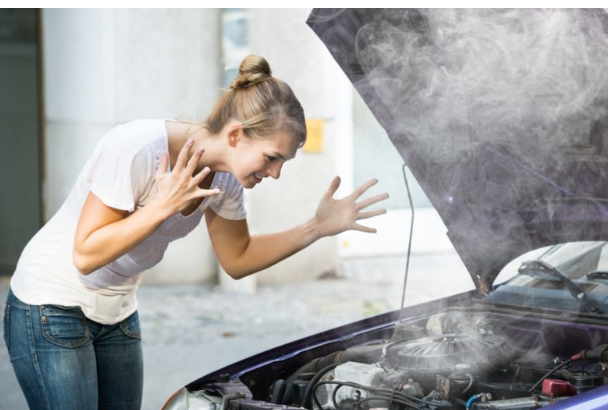 What to Do if Your Car Overheats

Worried about your car overheating? If you have a newer car, the cooling system will give you plenty of warning before this happens. But, it’s still possible, especially as your vehicle gets older.

The complex systems have heat sensors and electric fans that run off computer programs. These are designed to keep your engine running at its optimal temperature, even on the hottest days.

When that happens, the damage to the engine becomes serious and sometimes permanent. Don’t keep driving your car if you suspect it’s overheating. Instead, follow these tips to get yourself to safety and your car somewhere it can be fixed.

1. Watch For the Signs

Catching an overheating engine early is the best way to prevent damage and danger. We’re not all master mechanics, though. How can you tell if your engine system needs a little extra TLC?

On hot days, your hood may seem like it’s burning up, but that doesn’t mean the engine is hot. It means that you might be able to cook an egg on the top of your car, although the internal parts should still be working fine.

However, if you start to see “smoke” coming from under the hood when you’re driving or parked, that is never a good sign. It’s likely steam releasing from the wrong direction.

Around the time the steam shows up, the temperature gauge on your dash will start to point to the “H” (high) or into the red zone. Pull the car over as soon as you safely can when you notice this happening.

One more sign of impending problems is a smell coming from the engine. Sickeningly sweet smells could mean your coolant is leaking, or an odor as though something is burning is attributed to an oil leak.

As soon as you notice any of these signs, the only driving you should be doing is to a mechanic’s shop. Otherwise, you could end up breaking down in the middle of a busy highway, like in Glendale, CA, and causing an accident.

So you have to drive anyway, and you’re trying to baby your car to get it to its final pre-fixed destination. What should you do if your car is overheating while you’re on the road?

Well, the first thing to try is to warm it up. Yes, although it’s overheating, if you turn the heater on, you’re pulling warmth away from the engine system. It pushes the heat into the driver’s compartment, where you’re riding.

You’ll warm up, and the engine’s cooling system won’t stress as much. This could be enough to cool the engine down and get you where you need to go. If the temperature gauge begins to move back to the neutral spot, you’re okay to keep driving cautiously.

So the heater trick didn’t work, and your temperature gauge is still climbing into the hot zone. Before you’re forced to pull over dangerously, find a safe spot and stop the car. Shut the engine off, and it will cool down quickly.

Consider calling for help if you have roadside assistance or someone who can tow your car. In the meantime, be patient. The engine won’t cool down for a good 15 minutes or longer. Don’t open the hood because the steam could be so hot that the instant release will burn you.

As long as you’re well off the road and in no danger, take this time to be productive. Take the steps to find someone to fix your car. If you’re going to be late somewhere, let them know.

If you have coolant (also known as antifreeze) with you or someone can bring you a bottle, when the engine is cool enough, you can add the liquid to the radiator if you’re comfortable with this. Don’t feel bad if you’re nervous about playing with engine parts. You may not be a mechanic, and that’s fine.

But if you are confident enough to ensure the hood is cool when you touch it, and you have gloves and your owner’s manual, this next step is for you. Open your hood and find the radiator cap. Use a towel to cover the cap and push it down to loosen it slightly. This lets it release the pressure that has built up.

When the pressure is released, unscrew the cap completely and remove it. Slowly pour the antifreeze into the radiator until you reach the line that says “full.” Alongside the radiator is an overflow reservoir. Any leftover coolant can be poured into that container.

Finally, close the cap, shut the hood, and turn on the engine. If your temperature gauge is neutral, drive the car to the nearest safe place to get it checked out.

An overheating car should never be ignored. It doesn’t mean you can’t drive it. Remember that doing so could turn a simple fix, such as a faulty part that needs to be replaced, into a permanently damaged engine.

If you must drive your vehicle, use these tips to keep yourself safe and the engine cool until you can get it repaired.

What Can Scansnap Do for Your Business?

What is the best way to clear CCIE Security exam?

The Top Considerations for Choosing the Right Internet Plan

Get the Potent Mental Treatment at Holistic Rehab Center