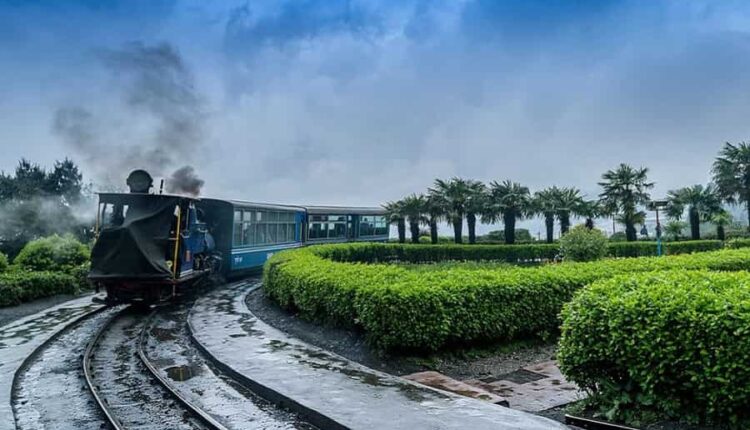 Situated in the state of West Bengal, Darjeeling is titled as ‘The Queen of Hills. On the feet of the Himalaya Mountain, it is one of the most important places to visit in India. At first, this place is used as the summer resort by the British. The Himalayan Railway or the toy train is another important aspect of this place. The backdrop of Darjeeling is the view of Mt Kanchenjunga which is regarded as one of the highest peaks of the world. Tourists from all over the world come here to drink the beauty of nature all through.

Darjeeling is a quiet city during the daytime but at night it changes a lot. The well maintained pedestrianized shopping area can be seen here. The stores with clothes, crafts, books, and tea shops maintained by different ethnic groups are the symbol of the place. The famous landmark ‘Mall Road’ is one of the best places to visit in Darjeeling with lots of shops for shopping and various eateries. Coming back to Chowrasta, the place is at its best at the time of setting sun. On the benches with a cup of coffee is the proper way to enjoy yourself.

To reach Darjeeling by air Bagdogra is the nearest airport, which is well connected with Delhi and Kolkata. On-road you have to start your journey from Siliguri. To avail through train Siliguri or New Jalpaiguri will be the nearest stations.

Elevation and the Boundaries of Darjeeling

Darjeeling is located in the lesser Himalayas with an elevation of 2000mt or 6700ft. The range of the Darjeeling mountainous region is ‘Y’ shaped which consists of Kalapahar and Jalapahar with two diverting arms which end at the North of the Observatory Hill. ln the Lebong Spur the North Eastern arms dip down suddenly and the North-Western arm ends near Tukvar Tea Estate. The most important mountain visible here is Kanchenjunga which is 28, 209 ft high. On the sunny clear days, the view of Mt Everest, the highest peak of the world can be observed from here.

The soil of this region of West Bengal is chiefly composed of sandstone and conglomerate formation. The soil is not suitable for agriculture. As it is contained of steep slopes, the area observes frequent landslides during monsoon. It falls under the seismic zone near the convergent boundary of the Indian and Eurasian tectonic plates which are subjected to frequent earthquakes.

According to the census of 2011, Darjeeling has a population of 1; 32, 016. The sex ratio of this place is 1005 females against 1000 males. The literacy rate of this place is 93%. Bhutia, Chhetri, Gurung, Lepcha, Limbu, etc. are some ethnic tribes that reside in Darjeeling.

Indo Aryan Khas and the Mongoloid Kirats are some other denominations resides here. Anglo Indians, Bengali, Chinese, Marwaris, Rajbansis, and Tibetians are also included in the community. Nepali, Bengali, Hindi, and English are the language here. Bengali is spoken among the people of plains and Tibetian is spoken among the mountain people. Dzongkha is the language of the Bhutias.

Between 1991- 2001, Darjeeling has observed a steep growth of population which creates an infrastructure and environmental problem. The forests and other natural wealth are adversely affected by the growing population.

The predominant religion of Darjeeling is ‘Shivite Hinduism’ and ‘Vajrayana Buddhism ‘. Animism and Shamanism are some other religions that are being practiced here.

The main festivals of Darjeeling are Dashain, Tihar, Losar, Buddha Jayanti, Christmas, etc. Buddhist Ethnic groups are celebrated their New Year called Losar during January and February. During the festival of Tihar, different types of songs are performed. Darjeeling Carnival is initiated by the society named Darjeeling initiative in which the musical and cultural heritage plays the main role.

In ‘Incredible India‘, the culture of Darjeeling is diverse. Various types of festivals are organized here along with different types of people. Different distinct languages and cultures make Darjeeling a place of diversity.

Many buildings of Darjeeling are of Colonial architecture churches, administrative palaces, schools, Monasteries, and pagoda make Darjeeling the Queen of Hills a spectacular one.it is also regarded as the center of music. Peace Pagoda is built here in 1992 by the Japanese Buddhist organization NipponzanMyohoji.

Mixed culture prevails in the cuisine of Darjeeling. Momos are the most popular local food which is steamed with meat and vegetable fillings. It is served with clear soup and hot soup. Aloo dam is very much popular and is served in different ways.

Another popular food is Thukpa, the origin of which is Tibetan. It is a homemade soup with noodles, meat, egg, and vegetables. Soya beans, bamboo shoots are used for making food. Local beer is made by fermenting millet.

The hilly area around Darjeeling was dominated by the kingdom of Sikkim till the 19th Century. ln 1816 CE after the treaty Sugauli, Darjeeling was ceded to Sikkim. In 1774 CE the treaty of salt and water was violated and the territory between the Arun River and Teesta River became a part of Yakthung Laje Limbuwan.

Gurkhas tried to capture Darjeeling many times from 1780. In 1814 Anglo- Nepalese war broke out and another treaty was signed in 1816. In 1817 through the treaty of Titalia, the British Raj granted sovereignty. In 1878 a team of British delegates stayed in Darjeeling on their way to Nepal and decided to build a sanatorium by taking leave from the Chogyal of Sikkim. During 1864 and 1865 several wars and treaties were signed. In 1866, Darjeeling district gets its shape and size with a covering area of 3200 sq km.

Darjeeling became a hill station for the British, who want to spend hot summer days here. The population increases and roads were built to connect the city with the plain between 1839 and 1842. A military outpost was built in 1848 and it became a municipality in 1850.

Commercial tea cultivation starts in 1856. In 1864 Darjeeling became the formal summer capital for the British. During 1864 the Scottish Missionaries took care of different schools and welfare centers here.

The Indian Independence Movement spread through the area. The communist activities against the British prevailed there. After Independence Darjeeling became a district of the state of West Bengal. The Darjeeling district is consisting of Darjeeling, Kurseong, Kalimpong, and some regions of the Terrain region. The hill population is mainly Nepalese, while the population consists of refugees emerged from the partition of India. Later in 2011, GTA (Gorkhaland Territorial Administration) was formed by signing a pact between West Bengal Govt. & Govt. of India.

Nearly five lakhs of people visit the place each year. Different types of attractions are there to attract people. It is a place full of natural beauty that soothes the mind of every traveler.

It is situated at the highest point of Darjeeling district and is famous for its dazzling sunrise viewpoint and snow-covered peaks during the clear sky.

It was established in the honor of Tenzing Norgay and describe as a pilgrimage for the enthusiastic mountaineers all through the world.

Some rare animals are the residents of this place which are the animals of high altitudes and mostly from the upper Himalayas.

The ropeway which is known as Rangeet Valley. The picturesque surroundings will give you a different type of pleasure.

It is located just below Ghum which is a spiral narrow gauge railway track where the toy train takes a sudden turn.

The Pagoda is built in a traditional Japanese style where you can join the prayers. In peace Pagoda, there are long four Avatars of Lord Buddha and the top view is marvelous.

The monastery belongs to the Kagyupa sect of Buddhists. A large open terrace is there where you can relax and enjoy the views around.

Darjeeling, an enchanting place in our Incredible India is a must-see for everyone. Go and explore the place which will be in your mind all through the time.

What are the key components of master data management?

Real games, including good games, give away hard, get 100%