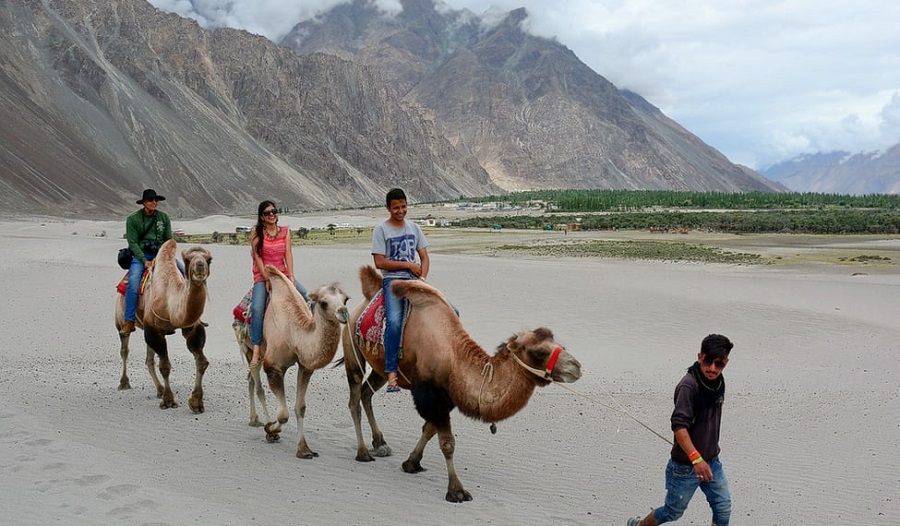 10 things to do in Ladakh this Summers

Ladakh – “The Land of High Passes” situated in north part of India, which is a very beautiful state of India & almost every Indian traveler’s bucket list for sure. Inhabited by the people of Indo-Aryan and Tibetan descent‎, the culture and history is very much related to that of Tibet.

The Summers of Ladakh, from June to September is the best time to visit this exceptional paradise with snow-clad mountain peaks, stunning views and lush greenery. Every year travelers from around the globe reach here to explore the beauty of Ladakh.

Pangong Tso Lake is an absolute must see on your Ladakh trip. Pangong Tso, means long enchanted lake, is very aptly named as the view of the long capped mountains and blue skies can be described as very enchanting. Taking an overnight stay at the Eco friendly tents can be a spectacular experience which one might cherish for life. And you definitely know that the climax scene of 3 Idiots was shot here.

Ladakh happens to be every bikers Dream. Every year bikers from across the world reach here which is known as the best routes to ride in the world, the 475 kms long Manali-Leh Highway. More than half of the route is higher than 13000 feet, infrastructure support is minimum. But yet the drive through the Manali-Leh highway will leave you dumbstruck and give you memories to cherish for lifetime. The favorable time is June- September.

River rafting in Zanskar River is one of the most thrilling things to do in Ladakh, and an experience worth taking one for sure as the water comes down from the glaciers upstream.  About an drive from Leh, it is some 3 hours of rafting from Chilling to Nemo, which includes class III rapids. There are number of tour operators who might charge between 1300-1500 Rs a person. Best time is June to September.

Ladakh will take you to a complete different world. With so much more than experiencing the mountains of the Himalayas, walking in the remote valleys, hiking at the tiny villages, and the beautiful Buddhist monasteries in the cliffs, it offers some incredibly picturesque treks. Some of the popular treks In Ladakh are Indus Valley Trek, Spituk-Stok Trek, Nubra Valley Trek, Chadar trek etc.

Referred to as “the Mini Tibet “this is the land of Buddhist culture and amazing monasteries. Some of the best Buddhist monasteries are here which are a must in your Leh-Ladakh itinerary. There are more than 100 monasteries, some of the famous ones are Hemis, Diskit, Phugtal and Thiksey. An experience here amongst the tranquil environment of the serene landscapes enriches your soul and is a great stress buster too. Try doing some meditation in an open monastery.

A must to see heritage site and a former Royal Palace “Leh Palace” was built by King Sengge Namgyal in the 17th century. The royal family had to abandon the Palace and move to Stok Palace when the Dogra forces took control of Ladakh in the 19th century. The palace has 9 storeys and is almost in ruins now, but has been preserved as a heritage. The palace takes you back to the royal glory and still makes you feel it’s enamour.

Do not be surprised, but how about going on a Camel Safari in Ladakh? Yes, Camel Safari remains a popular thing in the deserts like Rajasthan, but one can also experience it in the cold deserts of Ladakh. This is appropriate from July to September. These safaris provide an emphatic view of the valleys and the villages. The only thing needed to be mastered is the balancing act and the movement of the camels which is not so tricky of course.

Jeep Safari definitely will add up a unique thrill to your Ladakh trip. You can explore the high altitude destinations of Leh, Ladakh and Spiti by using the customized Jeep safari tours offered by the Tourism board of India. This new adventure has recently been well taken by the adventure lovers.

Apart from trekking, mountaineering and Safaris there’s more in Ladakh. If you ever dreamt to fly, Ladakh gives you the opportunity via paragliding. In the ranges of Khardungla Top, the highest motorable road in the world, tourists from not only Ladakh but also all over the world try the paragliding activities here. Now this is definitely a place with a lot of adventure buzz happening.

Not something you can miss definitely. The Food of Ladakh is a mix of Indian, Tibetan, and continental. This is due to huge number of travelers flocking to this place every year from different corners. Most of the Ladakhi population is engaged in agricultural activities, hence vegetarian food is plenty and also popular. Non Veg food mainly consists of chicken and mutton. Some of the liked cuisines of Ladakh are Momo, Thukpa, Thenthuk, Skyu, Paba and Tangtur etc.

You can pick up some great souvenirs from the shops in Ladakh like Copper samovars, Buddhist relics, tangkhas and prayer wheels, wooden masks, silver jewellery, turquoise and coral stones. The most saleable items are Kashmiri shawls and stoles, hand-woven blankets and rugs, woolens etc.

Adventure trips you must go to before you die!